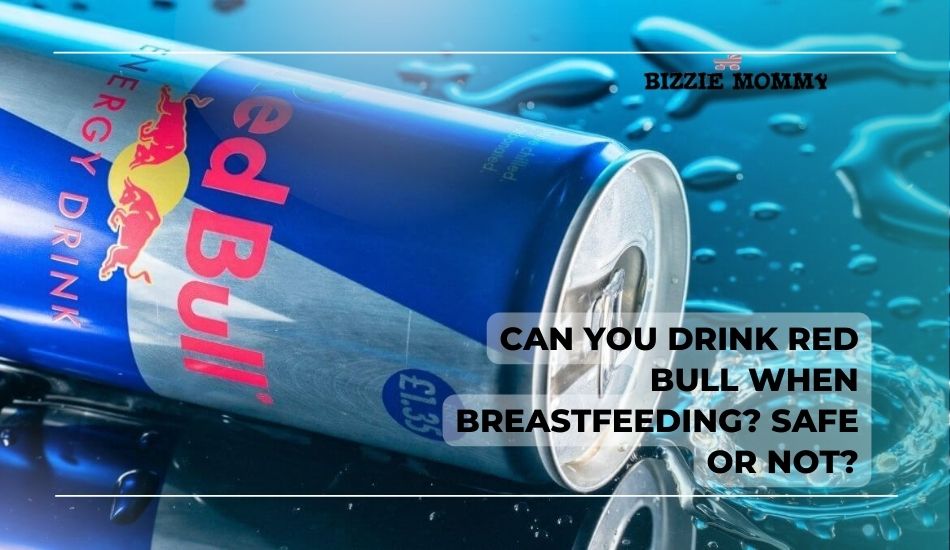 With all those sleepless nights and diaper changes, we all know how exhausting the first few years of motherhood are. Late-night feeding sessions drain energy, and you might end up considering taking a few sips of an energy drink or a cup of coffee, but what if you are breastfeeding? It wouldn’t matter having a few sips of Red bull, or would it? Here is all that you need to know about energy drinks and breastfeeding.

Whatever you consume during breastfeeding enters your bloodstream and spills into the breast milk 60 minutes after the intake and is passed along to your new baby. Most energy drinks contain ingredients like caffeine, artificial sweeteners, Creatine, and vitamin B, which might end up affecting the baby through breast milk. Among these, caffeine poses a huge threat to babies, and a breastfeeding mother should pay attention to her caffeine intake, be it in terms of energy drinks or coffee. Around 1% of maternal caffeine is passed on to the baby through breast milk. As per CDC guidelines for a nursing mom, 300 milligrams of caffeine intake per day is allowed, and anything more than that might affect the baby. You should wait at least 3-4 hours after you’ve had caffeine, before the next feed, just to get it out of your system. But the question is, is it really safe to consume caffeinated beverages during breastfeeding and what can you do to prevent damage to your baby? Here are some things you need to know as a breastfeeding mom considering energy drinks.

Is It Safe To Drink Redbull When Breastfeeding?

Red bull is considered to be a well-known caffeinated beverage among other energy drink brands, and like most energy drinks, it boosts stamina and concentration and helps deal with fatigue. Such enticing claims of most energy drinks might tempt you into consuming one, just to fight the exhaustion that comes along with this new phase of your life, and you might think about whether it is safe or not. This might come as a surprise, but you can drink Red bull while you are breastfeeding, just make sure it’s in moderation. It may not be harmful for newborn babies if taken in small amounts, occasionally, but if taken in huge amounts, the baby might become fussy and stay awake. Most health professionals advise consuming energy drinks that have moderate amounts of caffeine and avoiding other harmful ingredients such as Creatine while keeping track of caffeine intake in the maternal diet during breastfeeding. One serving of 8.4 oz of Red bull, contains around 80 to 115 mg of caffeine, which is much more caffeine than a cup of coffee.

Maternal diet affects a baby’s health to a great extent. Whatever the mother eats or drinks, contributes to the production of breast milk, hence is transferred to the baby. Even though there are multiple ingredients at play, the biggest problem with energy drinks is their caffeine content, out of which 0.06% to 1.5% reaches the breast milk and is transferred to your baby. The same happens whenever you drink coffee. This might not seem like much but, as infants have a hard time processing and getting rid of the substance, caffeine stays in their bloodstream for a longer period. For instance, as adults, we take around 3 to 7 hours to eliminate caffeine from our bloodstream and on the contrary, in newborns, the half-life of caffeine is around 120 hours as their kidneys are still not developed well, and they lack the enzymes for the first few days of life.

How much Caffeine Is Allowed to Nursing Mothers?

As per CDC guidelines, a daily caffeine intake of less than 300mg is preferred by most health professionals, as drinking too much caffeine while breastfeeding affects the baby’s physical health. Moreover, try to take a break for about 4 hours after you’ve had an energy drink, just to clear your bloodstream before the next feeding. Due to the underdeveloped kidneys of newborns, it takes 65 to 130 hours to process the caffeine that enters their bloodstream whenever the child drinks breastmilk.

Can Caffeine Impact Babies While Breastfeeding?

Caffeine is a brain stimulant that enhances your thinking and makes you more aware and improves reaction time. It helps you deal with fatigue and sleepiness. Moreover, it increases your blood pressure and heart rate. You can drink caffeine during breastfeeding, but caffeinated beverages might end up altering your breast milk. Long-term intake of large amounts of caffeinated drinks might exacerbate serious health conditions such as cardiovascular problems and cause sleep disturbances in the mother while causing other effects on the baby. Adverse effects of caffeine in children include extra fussy behavior, keeping your baby awake even at night, and affecting their heart rate.

Why is Red Bull Avoided During Nursing?

Red bull, like other popular energy drinks, contains a handful of ingredients such as caffeine, Creatine, herbal ingredients, amino acids, artificial sweeteners, and vitamin B, which affect your infant’s health. Taking moderate amounts of such ingredients is essential, as anything that crosses the maximum limits, would affect the health of the baby.

Caffeine is a neurological stimulant that increases heart rate. On one hand, it gives you that extra energy and increases stamina, and on the other, if taken in large amounts throughout the day, caffeine might affect the baby when taken by lactating mothers.

Being the second most common ingredient right after caffeine, many energy drinks contain high fructose corn syrup and sucrose, which boost energy levels but are also associated with diabetes. A few studies show that high blood glucose levels during and shortly after pregnancy have a negative effect on a child’s cognition.

Commonly associated with protein metabolism, Creatine is a dietary supplement that helps facilitate muscle growth and increase energy levels. Though it is found naturally in breast milk, no significant research outcome has shown the adverse effects of creatine supplementation during breastfeeding. Few studies suggest that creatine supplements might help deal with deficiencies, but most stand against its use in breastfeeding mothers.

Many energy drinks contain high levels of Vitamin B, which is considered harmful. A variety of B vitamins are a part of energy drinks, including B2, B3, B6, and B12. All of these generally don’t pose a threat, unless taken in high amounts which may result in liver toxicity. B6-rich energy drinks intake as a 5-hour drink during breastfeeding is not safe. Occasional use of energy drinks might not affect your B vitamins but consider consulting your medical professional in case you’ve been taking creatine supplements as prenatal vitamins during pregnancy.

Found naturally in our bodies, Taurine is an amino acid that is also found in breast milk. But taking additional taurine during breastfeeding is not recommended.

Herbal supplements such as Ginseng and Guarana are also present in energy drinks. While Ginseng is known to improve reaction time and Guarana increases attentiveness, both of these are not recommended in large amount for breastfeeding mothers.

Can I Drink Other Energy Drinks When Breastfeeding?

Consuming drinks that contain caffeine in quantities less than 300mg per day might not affect the baby but consider avoiding energy drinks with high caffeine content. The serving size for common energy drinks contains about 80-150 mg of caffeine, while the US Centers for Disease Control and Prevention recommends a daily intake of not more than 300 mg per day, so make sure to keep track of your caffeine intake before drinking another cup of coffee. As there is no mention of caffeine in nutritional tables on such drinks, knowing the exact amount might be difficult, but it’s essential for breastfeeding mothers.

If you need a quick solution for your exhaustion and want to feel active while carrying out tedious activities throughout the day but don’t want to drink energy drinks while breastfeeding, you might consider drinking caffeine in the form of coffee. Energy drinks such as Red bull contain more caffeine than coffee. You can also consider other drinks that mention their exact amount of caffeine and have a lower caffeine content. Maintaining your diet or using dietary supplements such as Vitamin D and keeping yourself hydrated is the best way of gaining energy naturally.

The magical era of motherhood comes with a lot of stressors and exhaustion, and most of us are tempted by the ways of old, to reach out for a cup of coffee, or a Red bull. While doing so, it is important to consider whether consuming energy drinks while breastfeeding would affect your child or not. Energy drinks contain caffeine, sugars, and amino acids, all of which affect a child’s health. Around 1% of the caffeine in these energy drinks is secreted in breast milk, which seems pretty low, but considering the still-developing organs, and the lack of enzymes in newborns, the half-life of caffeine might be prolonged resulting in slower elimination. The infant might become fussy, have a hard time sleeping and eating, and have an increased heart rate. According to CDC recommendations, health professionals advise that lactating mothers can only consume a total of 300mg of caffeine per day, as excess energy drink consumption can result in a multitude of problems in the child. Breastfeeding moms should try considering other ways of boosting energy, keep track of how much caffeine they drink, avoid using energy drinks excessively, and cut down their caffeine consumption to protect their children from its harmful effects.

Every day with your baby is an adventure. But some days really make you wonder if there is something wrong with your baby. Like when his poop smells like mothballs. What is that all...

Continue Reading
link to How Long Were You Nauseous Before Labor? [Find Out The Norm]

About to be a mom? freaking out about the delivery is normal as your due date approaches. But is being nauseous before labor normal too? Labor is not just about contractions but rather a complete...